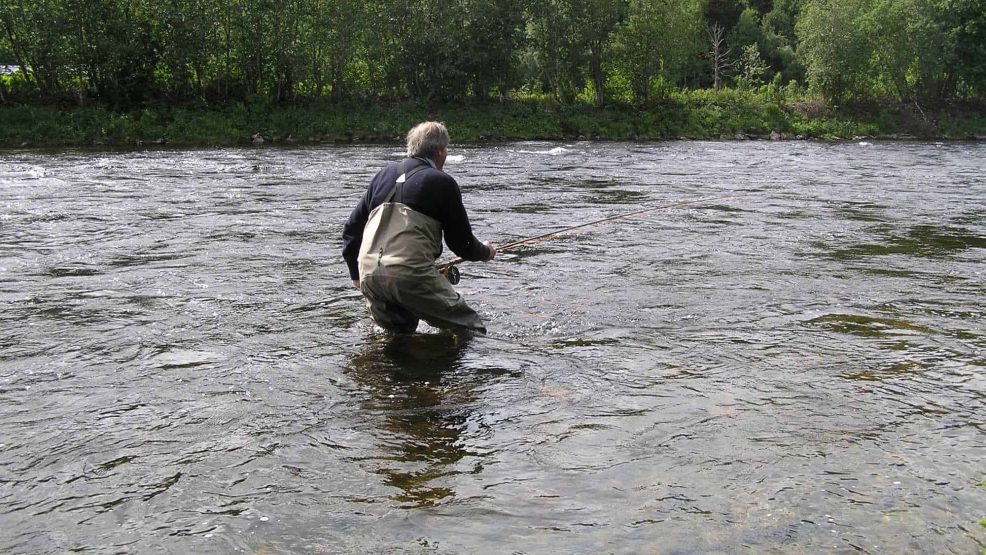 The Orkla is located in central Norway and is one of the most beautiful and prolific salmon rivers in the country, flowing north from Orkanger into the Trondheim fjord. Situated 2 kms upriver from Meldal, our fishing is 35 k from the river mouth and is classed as a middle beat, the fishable length of the Orkla being nearly 80k rising 400 metres over this distance. Similar to the Spey, in Scotland, it is fast flowing and mostly quite shallow with miles of stunning fly water.

In Norway the start date for salmon in most rivers is June 1, finishing at the end of August. It is in May and June when the first big salmon run, and our average weight of early season fish is often well over 20 lbs.

The early season big fish weeks are not for the faint hearted – 14/15ft rods are required with high quality reels, plenty of backing and strong leaders of 25-30 lb plus breaking strain. Runs increase steadily through July, with fresh fish continuing to enter the system in late August. Generally grilse and sea trout start to appear from mid July. The most productive weeks in recent years have been July and first half of August .The  Orkla has a regulated flow and therefore even in extreme conditions always has water, and at a fishable temperature. Floating lines work well throughout the season, although sometimes a sink tip helps and a sinking line may occasionally be required in June or in heavy water conditions.

In the 9 years that Wild and Exotic have been representing this beat on the Orkla many 30 & 40 pounders have been landed on the river, and our share has been well above average. Even in good grilse years the average weight for the river does not drop below 5 kg. Our main beats are mostly conjoined, overall 5.5k in length, and much of them double bank. Accessed by good roads and tracks there are seven huts, the main one with bunks for enthusiastic  late night or early morning fishers.

The River & Beats: In terms of size the Orkla is smaller than the nearby river Gaula . It is, nevertheless, a good sized river with a heavy flow . The 1500 ft drop over the fishable length produces  weighty & powerful fish.  With unlimited fishing hours pacing oneself is key to success. Wading is pretty easy almost everywhere.

The Fishing: Your host and leaseholder Anthony Luke has a lifetime’s salmon fishing experience with many of those years guiding in Norway and elsewhere.  Anthony acquired the water nine years ago and  knows the beats  intimately and will be assisting rods during their week.   It is very likely that guests will encounter large fish.  We will pleased to advise on tackle as it always a shame when the big one gets away due to inadequate preparation or faulty tackle.

June fishing has improved a lot since the embargo on netting in the Trondheim Fjord was put in place. From 2010 the fjord netsmen were further restricted. Bag limits have also been imposed on fishermen, which is a good thing.

The beats have produced an average of 124 fish over the past 4 years. 2007 was ok, but with few fishermen and little knowledge of the water the final tally not exceptional.  2008 was excellent with 143;  31 of which were “Storlaks” averaging 20 lbs. In 2009 we landed fewer fish, although  more fish passed through the counter and the average was a little higher. 2010 was a record for us with 168 landed fish, despite the upstream count being down on the previous year. The rod effort per day stat. in 2010 was .4464, which is high anywhere, let alone Norway.  June has been disappointing the last 3 years, but with a return of good grilse numbers and heavy 2 sea winter fish we are expecting  good June runs in 2015.  We are one of the few fly only beats on Orkla.

The Accommodation: We moved to a new lodge for the 2010 season, which is close to the river and has 5 guest rooms, upstairs and downstairs bathrooms and a much larger kitchen area. The lodge, which is very comfortable and only a short walk to the home beats, has been well received by all of our guests. The lodge is normally let with the fishing on a weekly basis.

Transport: Flights to Trondheim are direct from Gatwick,  otherwise via Oslo, Bergen or Stavanger.  Hire cars are readily available and the journey from Vaernes airport to the lodge is 1½ hrs. There will also be one car on site. Flights & cars are not included in the price.

Please contact Wild and Exotic for latest availability on 01439 748401 or by email to Adrian@wildandexotic.co.uk

Try not to miss: Orkla, one of the major Atlantic salmon rivers in Norway. Wild and Exotic currently offer no other destinations or activities within Norway.

Visas: Visitors from the UK do not currently require a visa to enter Norway