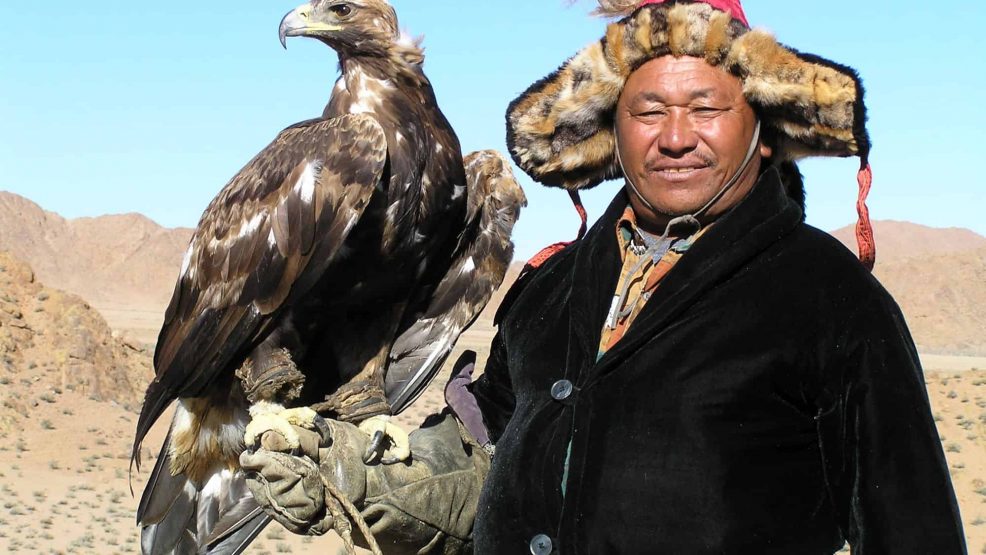 Wild and Exotic itinerary for hunting with Golden Eagles in Mongolia

Hunting with specially trained eagles is one of the oldest and most spectacular customs of Mongolia’s Kazakh people, passed down from generation to generation. This tradition displays the pride of the Kazakhs and their skill as hunters. The annual festival brings together the best hunters and their eagles to display the skills of hunters and birds. The festival is held in the extreme west of Mongolia, at the heart of the majestic Altai Mountains, an area featuring rivers, glaciers and the beautiful landscapes of Mongolia’s Bayan Ulgii Province.

Day 1: You will be met on arrival at Ulaanbaatar’s Chinggis Khaan International Airport, and transferred to the Shangri-La, one of the best hotels in the city. You will pass a large suburban area, where traditional nomadic felt tents are located next to Western styled family houses. This energetic city of more than one million people is home to nearly half of the Mongolian population. Migration is a tremendous challenge to this fast growing city. Overnight: Shangri- La Hotel

Day 2: Today we encounter Mongolia’s spiritual heart as well as its political, economic, and social hub.  This energetic city of more than one million people is home to nearly half of the Mongolian population.  Originally a nomadic Buddhist centre when founded in the 17th century, Ulaanbaatar ceremonially changed locations 28 times before settling permanently at its present site in 1778.  The city also changed names multiple times until it was officially dubbed “Red Hero” (Ulaanbaatar) in 1924 upon becoming the capital of the new Mongolian People’s Republic, a Soviet satellite (the Mongolian government answered to the Kremlin until the USSR dissolved in 1991).  Highlights of our full-day tour include the Fine Arts Museum, which showcases a noteworthy collection of religious art from pre-history to the early 20th century such as metal sculptures, scroll paintings, and papier-mâché masks; and the National Museum of Mongolia with its diverse collection of historic artifacts spanning from prehistoric times to the 20th century, including an impressive assortment of Buddhist statuary and traditional ethnic costumes.  We also visit the important 19th-century Gandan Monastery, one of the few Buddhist structures that survived destruction by the Communist government in the 1930s.  The bejeweled 20-ton Migjid Janraisig statue, a replica of the original copper statue erected in 1911 stands as the monastery’s prime attraction. Overnight: Shangri- La Hotel. Meals: Lunch, Dinner

Day 3: In the morning you will be transferred to the airport for the flight to Ulgii, the centre of Bayan-Ulgii Aimag. The aimag was established in 1940, located in the extreme west of country, and shares border with both Russia and China. The culture of Kazakh majority is strongly influenced by Islamic Centre of Mongolia. The flight takes about 4 hours, including a stopover for refuelling. Our guide will accompany you on the flight. Kazakhs are also known for their handicrafts. Ladies will introduce you to the process of weaving of richly ornamented wall hangings. This day you will explore the Ulgii / visit to the Islamic mosque, market, handicrafts shops and museum. Overnight: Local Hotel or ger camp Meals: B/L/D prepared by camp chef.

Day 4: After breakfast, driver and guide will pick us up from the hotel and take us to the opening ceremony of the Eagle festival. See the parade of eagle hunters on horses, hunting outfit and accessories competition, and the Golden Eagles evaluated for their speed and agility. In the evening see a Kazakh concert of traditional songs and dances. Overnight: Local Hotel or ger camp. Meals: B/L/D prepared by camp chef.

Day 5: Traditional Kazakh games. Golden eagles display their speed and agility: each bird has to land as soon as possible onto a fox skin dragged by a horse. Participate in the excitement of some traditional Kazakh games, such as ‘aitis,’ a poetry duel, ‘kyzkuar,’ a dating game played on horseback and ‘kokpar,’ a wild game played on horseback with a goatskin. In the evening you will be invited to a Kazakh feast. Overnight: Local Hotel or ger camp Meals: B/L/D prepared by camp chef.

Day 6, 7, 8: Drive to Tobo Lake/ Eagle hunting. Today we drive to Tobo Lake. We will camp among Kazakh families, of which many are eagle hunters. Next 2 days experience more of this culture as a guest in their gers. Listen to their myths, stories and songs, and taste their food. We will stay overnight in a tented camp. The eagle hunting is one of the oldest and most spectacular customs of Mongolia’s Kazakh people, passed down from generation to generation.  We’ll saddle our horses and follow Kazakhs as they hunt.  We will meet the hunters, their families and their birds, and learn about the skills involved in the capture, training and use of eagles as hunters. Overnight: Tented. Meals: B/L/D prepared by camp chef

Day 9: Back to Ulaanbaatar via Bayan-Ulgii. After leisurely breakfast drive to Ulgii town and fly back to Ulaanbaatar.  In the afternoon there will be time for art and cashmere shopping before the evening program of a folklore show, followed by dinner at a local restaurant. Overnight: Sangri –La Hotel. Meals: B/L/D

Day 10: International Departure. After an early breakfast we will transfer you to the Chinggis Khaan international airport for your departure home. Meals: B

The price is inclusive of the following services:

The price does not include the following:

As ATOL license holders (#6445) we can book seats on most major airlines at competitive prices. We are usually able to make the booking (and fix the best price, less taxes and fuel charges) up to a year in advance with payment not normally due until 8 weeks before departure – this means that we can release your seats at any time up until payment is due without penalty.

Please note that it is the responsibility of the client to ensure they obtain the correct visa prior to travel. Wild and Exotic will assist with visa applications if instructed but cannot be held responsible for a client’s failure to obtain a visa for whatever reason. A valid visa is required for this holiday.

Neither Wild and Exotic nor the operators or suppliers can accept any responsibility for changes to itineraries or dates that may arise due to weather or unforeseen circumstances such as changes, disruptions or delays to airline flights for whatever reason. This holiday is subject to Wild and Exotic’s terms and conditions, a copy of which is enclosed with your booking form.

Getting there: The simplest and least expensive way to reach Ulaan Bataar from the UK is to fly with Aeroflot from Heathrow via Moscow. Alternatives include flying with Air China or British Airways via Beijing or Frankfurt.

Try not to miss: The snow capped Altai Mountains, golden sand dunes and open rolling steppe sprinkled with deep blue lakes in western Mongolia, the far north where mighty taimen swim up cold mountain rivers to spawn, and reindeer herders eek a living from the taiga forest, and the arid Gobi desert in the South.

Visas: Visitors from the UK require a valid visa in order to enter Mongolia. Wild and Exotic can assist with the process if required.

Why Mongolia: For the legendary hospitality and fascinating lifestyle of the nomadic herders riding hardy horses beneath clear blue skies through a wild and remote country. Visit the Naadam festival in July where the locals compete against one another in the manly sports of archery, horse racing and wrestling. In the north we can organise fishing expeditions for massive taimen, which attack flies imitating small rodents with unbelievable ferocity. According to the time of year, you may also be able to accompany the Kazakh people hunting foxes with golden eagles in the western mountains, or ride with mysterious reindeer herders in the northern taiga forests.